I did not have a lot of motivation to watch this episode, that is why I am late with my reaction on it. What do you expect, that is a flashback on Lee, and it was obvious to me what the episode is going to be about the moment I saw the preview. Lee has to overcome one more obstacle on his quest to become a ninja. Sign. 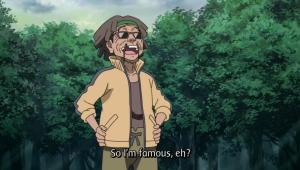 Here is the antagonistish guy of the episode. The old master Chen

So, the episode was about Lee and Guy encountering an old Leaf hero, Chen, who is a taijutsu user. He was supposed to be dead before Lee was born, but Lee tell the story of how he met that guy and how he was asking him to teach him his best technique, Leaf Dragon God. The guy did not do that and he beat Lee couple of times. Then, in the present time Lee beats him. The end.

But even if plotwise the episode had nothing interesting to offer, it was still more or less decent. At least they did not make Lee learn the technique. It was a ninjutsu anyway. Just look at it, where do you see a taijutsu there?

The guy doesn’t even moving when casting it. Sure, he starts it with the movement of his leg, but that is not enough to call it a taijutsu

Now, unfortunately I have a lot to say about the flaws of the episode. Even though I don’t think it was awful or anything, it has a lot of them. First, the character design. When you make a taijutsu user, you must stop and think for a second. You must ask yourself, how taijutsu work, and how the user’s look should be affected by his trade. And taijutsu use muscles. And this guy just doesn’t have any. And on top of that they made him wear glasses. Glasses, oh my, don’t you think they would fall off in a second if you try to move around really fast? That is bad.

Let’s take a deep breath and look at a very well drawn Tenten. Ok, now I calmed down a little, we can proceed

The next weird thing in this episode was the method that Lee choose to make Chen acknowledge him. He would bring him food and sit there waiting. I have no idea how that should have impressed Chen, but eventually he gave up and beat up Lee one more time. That was what Lee wanted, really. 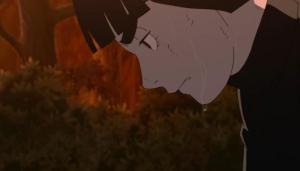 All that time Lee wasted there he might have been training. Just saying.

Now, there is one big thing I overlooked. You see, Chen had faked his death so he could quite being a shinobi. And he did it well enough, everyone thought that he is dead. But then, when three shinobi came to visit his grave (Lee was one of them) he, for no reason, revealed himself. Why would he do that? And how no one discovered that there is a shinobi living near the village?

Also, one more pick at the Leaf shinobi. Just look at how carefully they guard their scrolls:

I wasn’t Lee who did it!

At the end of the episode Chen takes off in the same manner Tatewaki did. But with Tatewaki it was more or less understandable. He lived the life he wanted to live. he had no regrets. While that old guy spend his last 10 or more years running away from the reality and hiding from his friends and comrades. How does he not have any regrets?

I think I am done with the rant. And now, to the bad news. The fillers will go on till June, and there is no guarantee that they won’t go on after that. We have nothing but fillers since March. Wow. I just hope they save enough money to make the up-coming battle in the manga-based anime look awesome. I want them to top all they did in the past.

Here is the preview for the next episode. I don’t even want to think what it is going to be about.

5 thoughts on “Naruto Shippuden, episode 312. Are the fillers gonna end? Ever?”

This site uses Akismet to reduce spam. Learn how your comment data is processed.